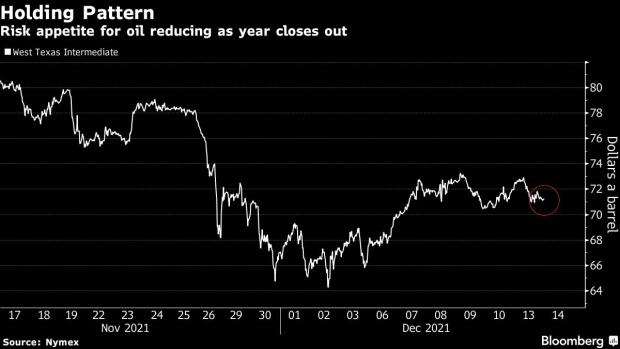 (Bloomberg) -- Oil held a decline as an increase in OPEC’s demand forecast for next quarter was offset by uncertainty over the omicron virus variant. West Texas Intermediate was little changed near $71 a barrel in Asia after slipping 0.5% on Monday. The Organization of Petroleum Exporting Countries boosted estimates for oil consumption by 1.1 million barrels a day, according to a monthly report from the group’s research department. The cartel still sees a surplus in the first quarter, albeit not as large as previously expected. “OPEC’s anticipation of a surplus in the global oil market suggests an imminent correction in prices, with WTI possibly retesting the $60 level,” Bloomberg Intelligence analyst Henik Fung said in a note. “The outlook for demand may be affected by a one-two punch of omicron’s spread across Europe and the Fed’s hawkish stance on inflation.”